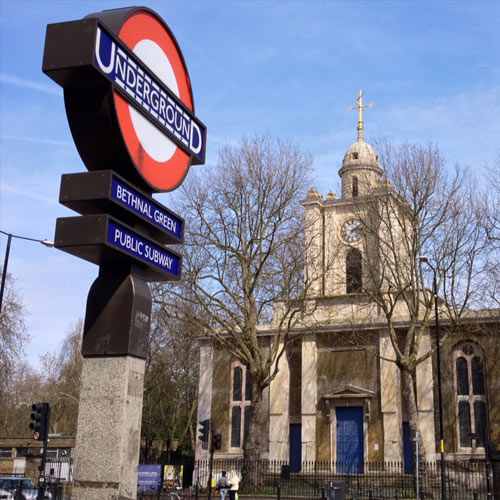 East London, Bow in particular, is steeped in history, from Roman times to the Great War, from the Suffragettes to the 2012 Olympics. It has been the centre of attention from its outset.

Stratford was first recorded as a settlement in 1177, the name is derived from its Old English meaning of paved way to a ford. The ford originally laid on the route of a pre-Roman trackway at Old Ford about 600 metres to the north, but when the Romans decided on Colchester as their initial capital for their occupation, the road was upgraded to run from the area of London Bridge, as one of the first paved Roman roads in Britain. The 'paved way' is likely to refer to the presence of a stone causeway across the marshes, which formed a part of the crossing.

In 1311 Bow remained an isolated village, often cut off from Stepney church by flood. Permission was given to build a chapel of ease to allow the residents a local place to worship. The land was granted by Edward III, on the King's highway, thus beginning a tradition of island church building.

Fairfield Road commemorates the Green Goose fair, held there, on the Thursday after Pentecost. Bow Fair attained a rowdy reputation, and by the mid-1800s, it had been suppressed by the authorities.

During the 17th century both Bow, and the Essex bank, became a centre for the slaughter and butchery of cattle for the City market. This meant a ready supply of cattle bones, and local entrepreneurs, Thomas Frye and Edward Heylyn, developed a means to mix this with clay and create a form of fine porcelain, said to rival the best from abroad, this became known as Bow Porcelain. In November 1753,

The Bow China Works prospered, employing some 300 artists and hands, until about 1770.

The match girls strike at the Bryant and May match factory in the 1888, which was a forerunner of the suffragette movement, occurred here on Fairfield Road. The factory was rebuilt in 1911.

Sylvia Pankhurst 1882-1960, Emmeline Pankhurst had begun the Women's Social and Political Union (WSPU), in 1903, with her daughters Christabel and Sylvia. Sylvia Pankhurst became increasingly disillusioned with the Suffragette movement's inability to engage with the needs of working class women, like the match girls. Sylvia formed her own breakaway movement, the East London Federation of Suffragettes and based it at 198 Bow Road, by the church, in an Baker's shop. This was emblazoned with "Votes for Women" in large gold letters, and opened in October 1912. The local Member of Parliament, George Lansbury, resigned his seat in Parliament to stand for election on a platform of women's enfranchisement. Sylvia supported him in this and Bow Road became the campaign office, culminating in a huge rally in nearby Victoria Park, but Lansbury was narrowly defeated in the election and support for the project in the East End was withdrawn.

Sylvia refocused her efforts, from Bow, and with the outbreak of World War I, began a nursery, clinic and cost price canteen for the poor, at the bakery. A paper, the Women's Dreadnought was published to bring her campaign to a wider audience. At the close of war, the Representation of the People (Amendment) Act 1918 gave limited voting rights to property owning women over the age of thirty, and equal rights were finally achieved ten years later.

Pankhurst had spent twelve years in Bow, fighting for women's rights. During this time, she risked constant arrest[12] and spent a lot of time in Holloway Prison, often on hunger strike. She finally achieved her aim, but along the way had alleviated some of the poverty and misery, and improved social conditions for all in the East End.

Bow as we now know it is a stark contrast to its smoky history. The entire area has become a sought after vicinity, full of conservation areas, bars and restaurants. The main pull seems not only to be its proximity to the City and Canary Wharf, but many the parks and open spaces on its doorstep.

The future for the area is set to change dramatically as the 2012 Olympics approaches. The area's infrastructure is being dramatically improved, and the less affluent surroundings are being redeveloped and generally tidied up.

Where the East End used to be known for its dark, criminal undertones, it has now seen a renaissance that has opened it up to many artists and media workers.

The future for Bow and its environs is going to be bright, money invested in the area should reap rewards as a synergy to the government spending in the area.

Nearby tube and DLR stations.

There are no longer any stations on the National Rail network in Bow. The No 8 bus terminates at Bow Church.

Bow is served well by bus and road, being sited at the junction of the A12 East Cross Route, and A11 Mile End Road. The proximity of tube stations mean that parking restrictions apply throughout the area.