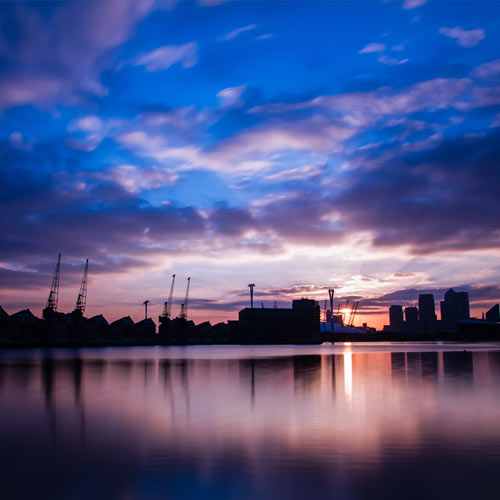 Situated two miles east of Canary Wharf are the Royal Docks. Comprised of Royal Albert, Royal Victoria, and King George V, they were built between 1880 and 1921 and were constructed to accommodate larger vessels unable to travel further up river.

During medieval times the area was known as "Hamme", a name meaning 'flat, low-lying pasture'. Cattle were grazed on what had come to be known as the Plaistow Marshes. By 1800 there was just one house (Devil's House) between Bow and Barking Creeks and only one road stretching from East Ham village to the river.

George Bidder sensed the potential of the area and soon he'd bought up the whole of the marshes between Bow Creek and Galleons Reach. He called the area "Lands End" and soon his investment was showing a handsome return as the land was sold for the docks and for a belt of factories along the River.

Important among the industrialists were Henry Tate and Abram Lyle who brought their refineries to the area. They merged in 1921 to form Tate & Lyle which still operates the Silvertown Refinery to the east. Their contribution to the history of the area, and its local life, has been significant.

The Royal Victoria Dock, which was opened in 1855, was the first dock built expressly for steam ships and the first to be planned with direct rail links onto the quay. The Royal Albert Dock was opened in 1880 by the Duke of Connaught after whom the modern swing bridge is named. The Albert was equipped with hydraulic cranes and steam winches to handle vessels up to 12,000 tons and was served by the Great Eastern Railway.

Over the period 1910-1950 the Royal Docks were relatively prosperous. The docks' layout permitted trans-shipment of break bulk cargos from ship to rail, to road and lighter transport or into warehouses for storage. Most of the cargo passing through the dock group was from deep sea trades, particularly with the British Commonwealth.

Traffic through the Royal Docks reached its peak in the 1950s and early 1960s. After that containerisation and other technological changes, and a switch in Britain's trade following EEC membership, led to a rapid decline

Finally in 1981 all were closed and Silvertown, Canning Town & North Woolwich were left with large numbers of jobless, with little prospect of new industry arriving.

It was at this difficult time that the London Docklands Development Corporation (LDDC) was formed to oversee the regeneration of the 8.5 square miles of East London land & waterways. The construction of London City Airport commenced at a similar time and the transformation of this devastated area was underway.